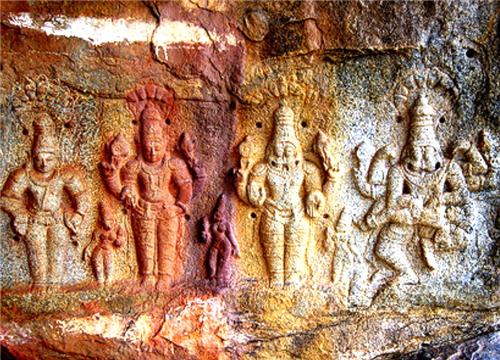 ‘Balari’, the term that instills piousness and devotion in the veins of the religious community refers to the Goddess of Power – Durugamma. It was the abode for number of great rulers and emperors.  It is really a matter of pride for the inhabitants to live in a town that tells the tales of so many heroes and their victorious battles. The magnificent flavor of a palate full of the essence of the past can hardly be missed if you are an art - enthusiast.

Bellary witnessed the victory and destruction of several dynasties. Here are the names of the successors of this ancient place of Karnataka.

Apart from these notable emperors of different periods, Bellary became the abode for Kakatiyas of Warrangal and Pandyas of Madurai. It has been used over and again for political and business reasons by notable emperors hailing from different dynasties. Aurangazeb, Nizams, British and many more chose this region for expanding their empire. Every brick of every monument and structure feels the ravages and destructions hurled by rulers of different time. They tell the story of the unraveled-past.

After the defeat of Hoysalas and Yadavas BY Islamic Sultanates, the Vijayanagar Dynasty arose under Bukka 1 and Harihara 1, who conquered the Bellary area. The place itself was conquered by the family members of the Hande Hanumappa Nayaka. After the decline of the Vijayanagara dynasty, the Nayakas were consecutively subsidiary to the sultanate Adilshahi. , the Maratha Dynasty, The Mughals, The Nizams, Hyder Ali, Tipu Sultan and at last the British Empire. The Handes continued ruling this area. After it was released from being a part of the Madras State, it was included as a region in the Mysore State.

Truth and myth behind naming of Bellary

Bellary could not escape from the controversy regarding its origin. There are many stories that hover round through the locals of the town. Historians are still trying hard to unravel the actual story behind the name –Bellary. Let’s take a look at the stories or myths that dominated the land for so many years.

The first story reflects the existence of Lord Shiva or Balleshwara. Locals and some historians say that the city got its name when few devout installed a balla in the region as they couldn’t find a Shiv Linga. Lord Shiva or Balleshwara was the supreme power in and around the city. For them no other name would be appropriate other than ‘Bellary’. Still now, several rituals and festivals are organized to show devotion towards the Lord.

Name of Lord Indra is also related while telling the story of the origin of the city by many people. According to them, the God slayed a ferocious demon named, Balla. Being the slayer and the enemy of the demon, Lord Indra naturally became popular as Balla- ari (which means enemy of Balla). There lays a hill, named Balahari Betta and the famous Malleshwara temple is located close to it.
Some historians say that the name might have been derived from Vallariand Vallapuri, a Kannada word.

In Ramayana, the great Hindu epic also relates the name of the city over and again. It says that Lord Rama while searching for his wife Sita, met Hanuman and Sugreeva at a region that lies close to Bellary.

A part of the Pallava family called Nolamba Pallavas conquered Nolambavadi. In the 11th century, they ruled regions of Nolambavadi under Hoysalas and Chalukyas.

Bellary was under the dominance of Nayaka rulers. But it was a subsidiary part of the Marathas led by Shivaji. During this era, the region was captured by Aurangzeb, the famous Mughal ruler. Asif Jah I, the Subedar of Malwa and Gujarat, killed and dethroned Mobariz Khan during the conflict in Shakar Kheda, in the Berar district. Asif came to be known as Nizam-ul-mulk and the region was included in the Nizam’s domination. During this time, Bellary was included as a tributary to Basalat Jang. There are many such incidents and events that make the city a prominent part of the History.

Places that still grab the attention of thousands of travelers include –
Exploring every nook and corner of the city can be really a never-forgettable experience for all the people who are attracted towards the past.

Various buildings and monuments were created during the British era. Some of them are modified, but they still offer the essence of the past.