Bellary is definitely the right option for you if you have the urge to bask in the glory of past. It offers wide range of things to quench the thirst of the art lovers.  From great architectural pieces, natural treasures to the hospitality of the locals, everything in the city is worth exploring. The city tells the stories of the rulers –their victory and defeats, the empires - their rise and falls, the life of the common people.

Though it has become an industrial town with many important factories, yet it still breathes the ravages and destruction hurled by different rulers of the past. It stands amidst the desolated buildings and structures to tell the untold story of the past. In every nook and corner of the city, one can find the glimpse of the bygone era. The city with its marvelous architectural construction also offers scope for unraveling the undiscovered truth that lie in each and every brick.

All the art-enthusiasts are attracted towards this ancient town. The piousness and strong faith in the almighty is quite prominent from so many temples. They are true religious from their soul and mind. So, travellers who want a bit of pilgrimage while traveling the planet can visit this historic and religious abode. 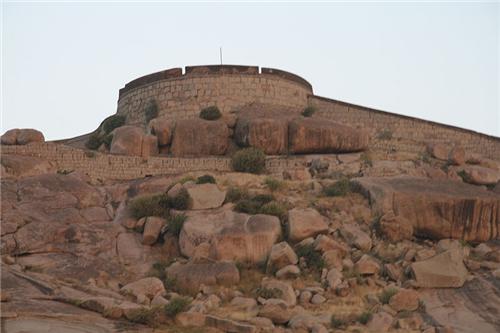 The city offers number of options for all the travel-freaks to smear the essence and spirit of the past as well as the beauty of the nature. Visiting the religious spots in the town along with other places just completes your trip in Bellary. There are number of temples to make you feel pious and close to the almighty. The name of the city reflects the presence of Balleshwara or God Shiva. He plays the role of the ‘massiha’ or the ultimate ‘muse’ for the locals. Festival and fairs are celebrated every year to show the pure devotion towards Shiva. Apart from these, the town is known for some of the most important Neolithic archaeological sites like Kudithini, Sanganakallu, Tekkalakote, Kupgal, Hiregudda and Budhihal. The Sanganakallu stretches over 1,000 acres and considered as the largest Neolithic site of Bellary.

This historic town lies in the rain shadow part of the Western Ghats. As a result, it has little rain from the southwest monsoon. Temperature reaches its pick during the months of March to mid-June. So, it is better to avoid these months, if you are planning for a trip to Bellary. 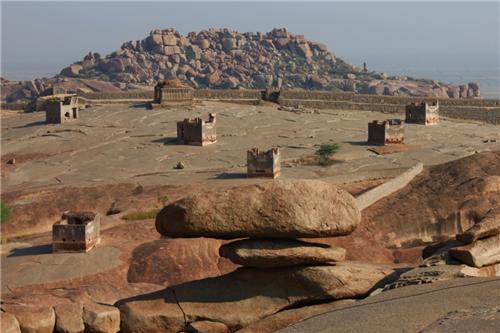 There are many places in Bellary that attract the attention of the visitors. They get mesmerized with the magical charm of the city.

Rocks are the most prominent features of this city. The town spreads around two rocky granite hills, namely the Bellary Gudda and the Kumbara Gudda. These are the most prominent feature of the place. Gudda or the hills embrace the city to make it more beautiful.  This natural treasure is now, used for business purpose. Granite extraction to make several things has become common.

“The Tiger of Mysore”, Tippu Sultan was the ruler of this amazing fort. Being created out of the monolithic rock, it is the world’s second single rock mountain. Seven colours water and the tunnel that connected the route to Srirangapatna of Mysore are some specialties of this beautiful architectural piece. During Vijayanagara era, Hanumappa Nayaka constructed it. 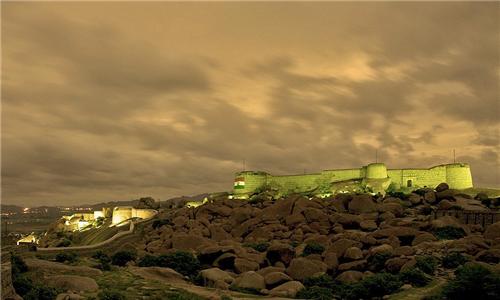 Travellers just love to bask in the beauty and charm of this hilltop fort. It is situated at the top of Bellari Gudda. The fort has two parts- the Lower and the Upper. The upper part was designed during the Vijayanagara Empire and the later was created by Hyder Ali. The upper portion of the fort consists of several cells, a temple, a citadel , cisterns and pools. The polygonal upper fort welcomes the visitor from a single entrance. On the other hand, the lower part has two gates. This architectural piece makes the travellers feel their deep-rooted connection with the past. It looks amazing during the night with different shades of colorful lights. The hilltop view and the green expanse makes it a worth visiting spot. The best part is that it is just 2 km away from Bus stand and Railway station.

Ballari Gudda or Ballari Hills stretches nearly 2 miles (3.2 km) and stands at a height of 150 m (480 feet). The length of this granite rock from south-west to north-east is about 350 m (1,150 ft). To the south and the east stands an uneven heap of boulders, to the north there is a wall of rugged and bare ridges and in there is a monolith in the west.

The name of the other hill is Kumbara Gudda. It is absolutely unique and special in its appearance. It appears like a human face if viewed from the south-east part. This is the story behind its nick naqme, ‘Face Hill’.

Other Attractions in Bellary

This historic cemetery was constructed as a memorial to the Turkish soldiers. There is a small but beautiful garden close to the airstrip where the martyrs were buried. During the First World War, these soldiers were brought to India.

This Gudda lies just in the opposite of the Municipal Junior College. There is  a pumping station and a water tank. It is also called as  Kaage Gudda. 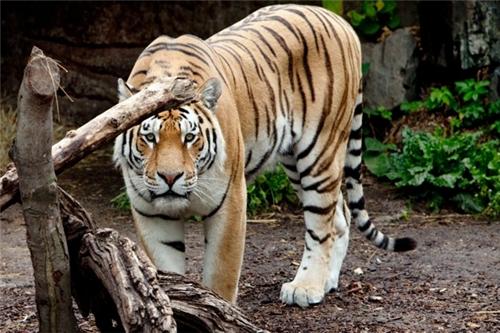 In the year 1981, this zoo and children part was inaugurated. It covers an area of about 2.4 hectares. From Blackbuck, Spotted Deer to Crocodile, you can see many species.

The other name of this amusement park is Dr.Rajkumar Park. It consists of an artificial lake and a musical fountain.

Religious festivals are dominant in this part of the world. Fares and an annual festival is dedicated to Lord Shiva. Holi is celebrated with pomp. Apart from these, Dussera, Deepawali, Ganesh Chaturthy and many more festive events add new life to the city.

This industrial town is well connected to other parts of the country through airways and trains. Bellary Airport offers Bellary town with domestic flights. Cities that are directly connected via flights are Goa and Bangalore. Travelers can reach this city from Bangalore by a direct train named Hampi Express.  It is well-connected to other cities by train. It is also well connected by State and National Highways and about 300 km away from Bangalore.

Bellary List of packages include adventure package, corporate package, honeymoon package , customized tour and pilgrimage packages. Local sightseeing can be covered in one or two days. For that travelers need to stay here for two to three days to visit the city in the best possible manner. The fort, zoo, Guddas, garden and parks, everything is worth exploring.